The hope of a family and the strength of a daughter.

Hi. My name is Caleb. I was the project manager for The Hope Venture until last August. Normally, I write stories without revealing myself as the author, but I just couldn’t do that with this one. I feel like this story has a gift to give each of us, and I can’t share it without bringing you in to how it has personally been a gift to me.

I think there is a tendency to see the content that The Hope Venture produces (or any non-profit for that matter) as another dose of daily media consumption. You know the trends, we’re constantly consuming media. We listen to it, read it, watch it, scroll through it. We live amidst a seemingly endless barrage of content that we honestly don’t know how to deal with.

I feel that. I’ll be scrolling instagram and I’ll see a photo that is meant to elicit some sort of personal response or engagement, but I will most likely scroll on by. I sometimes find it hard to pause long enough to even read the posts of some of my closest friends. Confession time, I even struggle engaging with The Hope Venture’s posts. And I was projects manager! The problem with this is that I don’t give these stories the time to actually touch me. I don’t give them the chance to reach out and grab ahold of me. I scroll through Instagram at arms length, keeping content just out of reach, and in doing so, I miss out on the reality that these photos are reaching out to me. I miss out on the reality that these photos are not content, not media to be consumed; these photos are real people, real stories.

Normally, the stories I’ve written have come from a personal experience I have had with someone overseas. But last spring I was tasked with writing stories of people I hadn’t met personally. So for the first time, I sat where you normally sit. I sat on the other side of the globe, thousands of miles away from the people in the stories. And it made me long to somehow reach through the screen and shake their hand. It made me want to travel to Africa and India to actually meet these people. Confession time round two, I am often tempted to think that the story won’t be truly impactful if I don’t actually meet them face to face.

And then I met Kavitha. 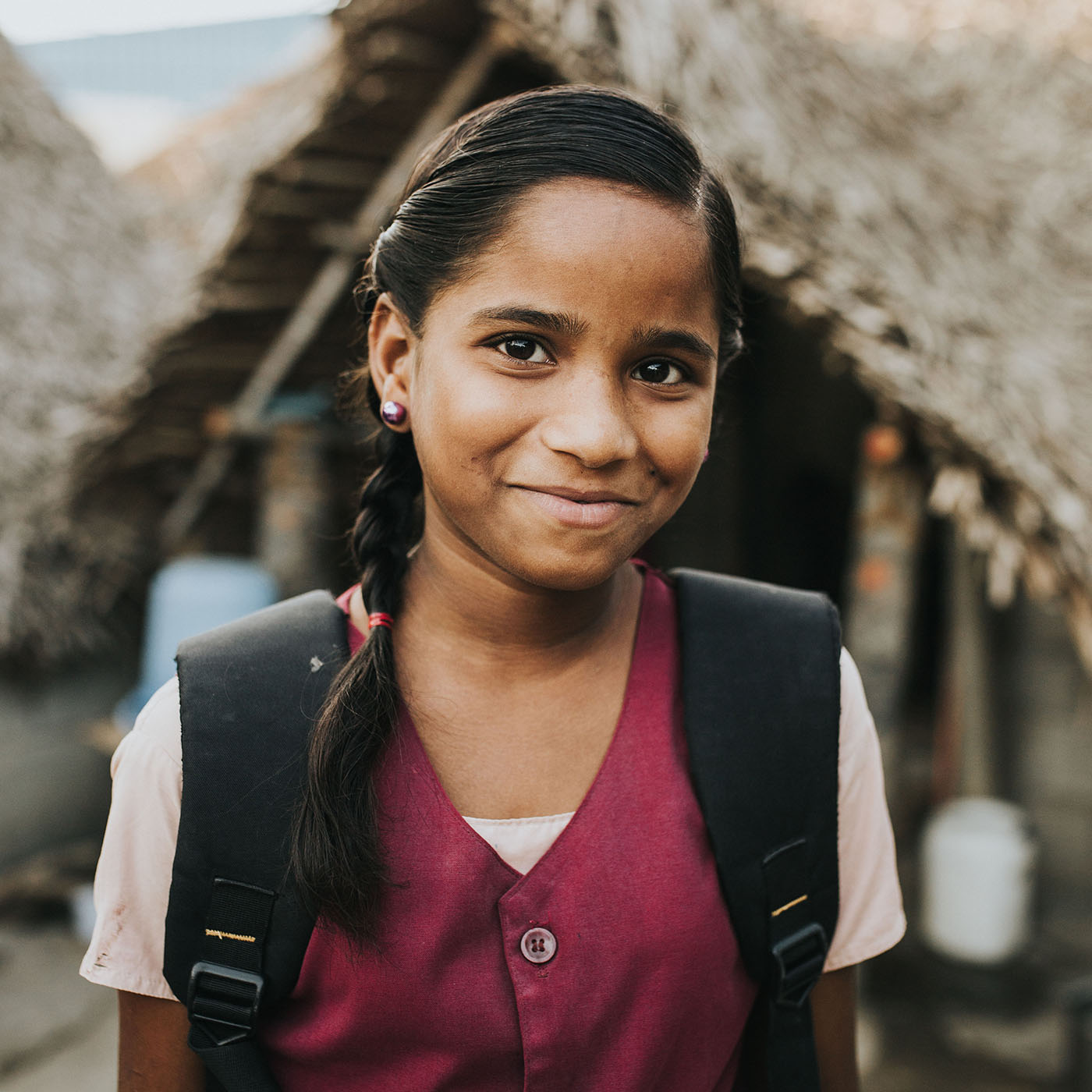 It was a couple of days after Josh (our Creative Director at The Hope Venture) and his wife Victoria got back from India. We decided to meet up at a coffee shop and talk through some of the stories that impacted them from the trip. I was sitting across from Victoria at one of those big work tables. Laptops were out, mugs were full, and they began to tell me about the people they met.

Victoria began to tell me about Kavitha. She gave the details: Kavitha is a 7th grader, she lives in the village of Selaiyur, she is the youngest in her family, she’s the only one going to school. She got a backpack through The Hope Venture backpack project. It felt like we were going through the motions, like the details of her life story were just facts that writers and creative directors need to sift through in order to produce relevant content so that people will donate to the backpack project. And then, catching me off guard, Victoria explained that Kavitha’s parents were born blind while simultaneously spinning her laptop around to show me a photo of Kavitha standing between her parents. 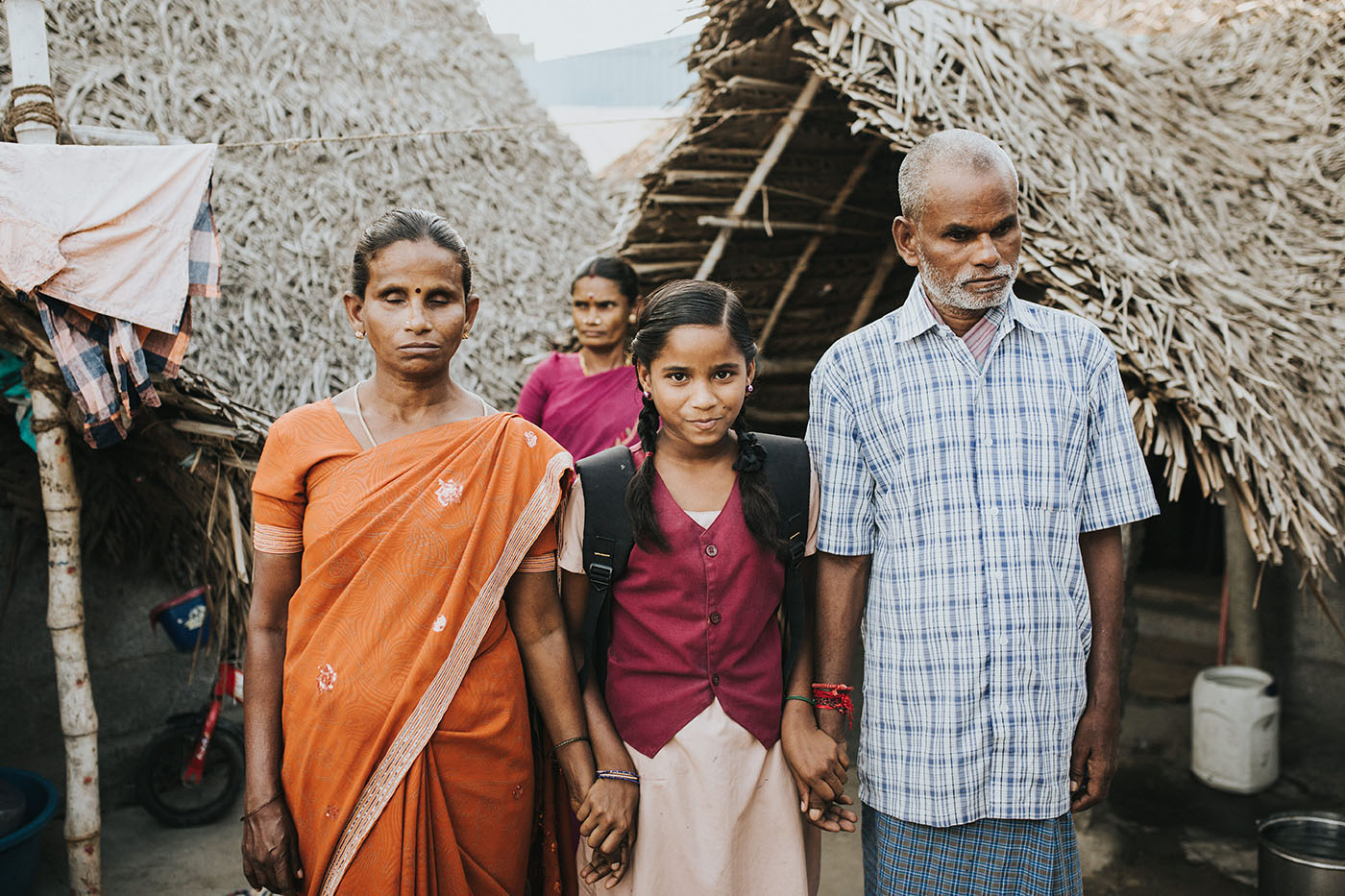 Kavitha’s gaze pierced through the screen. And there, at the big work table, Kavitha’s story reached out and grabbed me. Her eyes, a piercing look of determination. She stood facing forward with confidence and humility, holding her parents’ hands as their eyes avoid the camera. Her eyes seem to say, “I’ve got this.”

In that moment, I felt the power of story. I realized how much more there is behind the photo, how much the story matters. In order to see that this photo is not just another dose of media for our daily consumption, we need to learn the story behind it. For I will tell you, Kavitha’s story is not asking for a double tap and a digital heart. It is asking for your hands to be open, because her story is a gift. Her story is one that reaches out and holds open hands.

Kavitha is a 7th grader who lives in poverty in a village in India. Her parents’ blindness not only inhibits them from working and providing for the family, but it also ostracizes and outcasts them. Her father recently had a heart attack and now has trouble even moving around. Her older sister gave up school so that Kavitha wouldn’t have to. She was given a backpack and school supplies. She’s given a daily meal at The Hope Venture’s feeding center. Everyone is pulling for her, doing all they can to ensure she gets an education. She’s the hope of the family, the light in their darkness. And now she looks forward at the path ahead, the path that is complex and scary and difficult. The path that is far too much for a 7th grader to have to handle. And I’m thinking, she must feel the weight. She must feel the pressure. For she walks to school with far more than the weight of her backpack on her shoulders.

Yet Victoria tells me that Kavitha walks not as one burdened with the weight of the world. She walks with the strength not only to hold herself, but to hold her parents’ too. She’s confident, humble, and sweet. She has a big smile. Even though she’s the youngest, she’s clearly leading her family. Victoria simply said, “she’s incredible.”

And that’s what I see when I look at this photo. I see someone who is incredible. 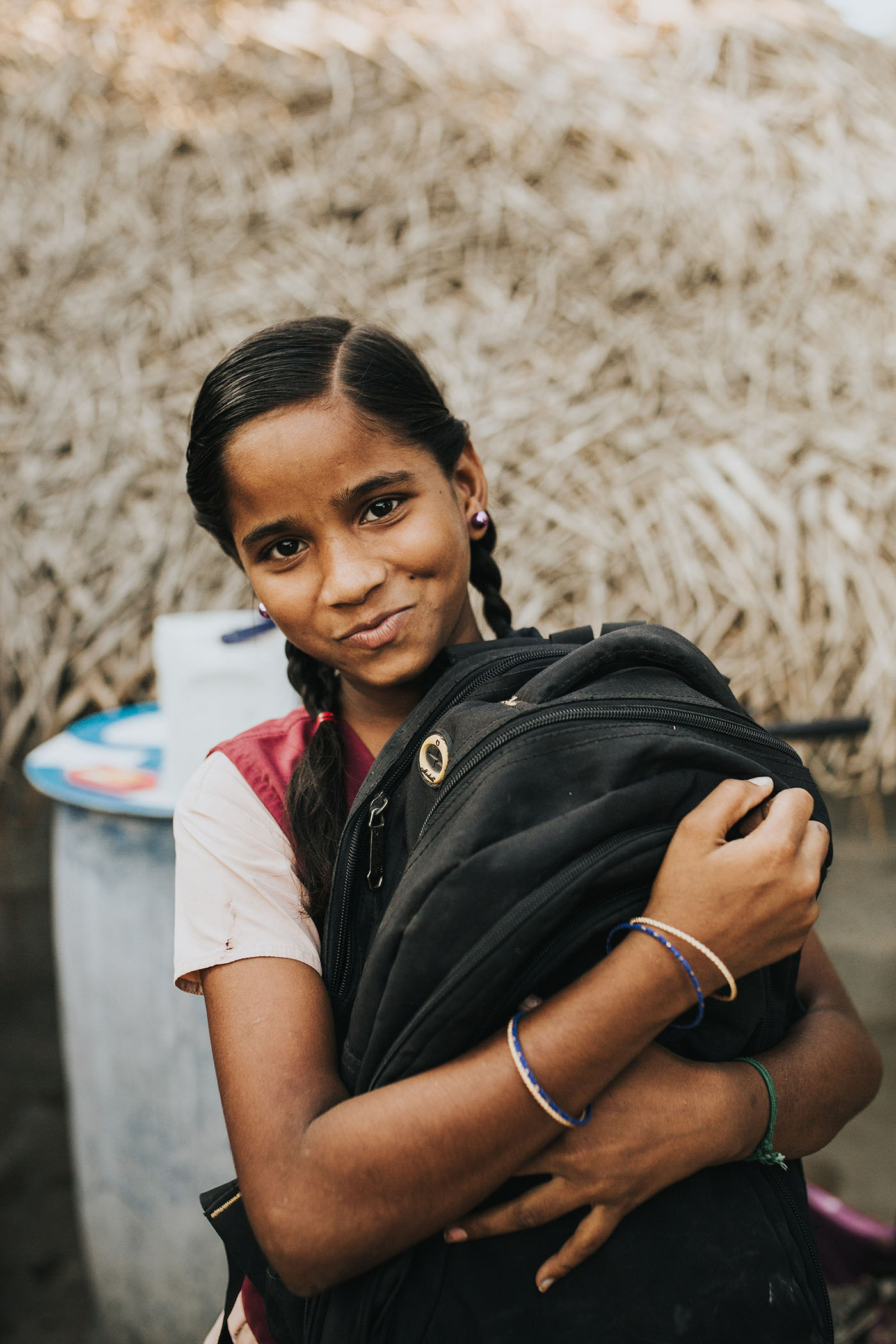 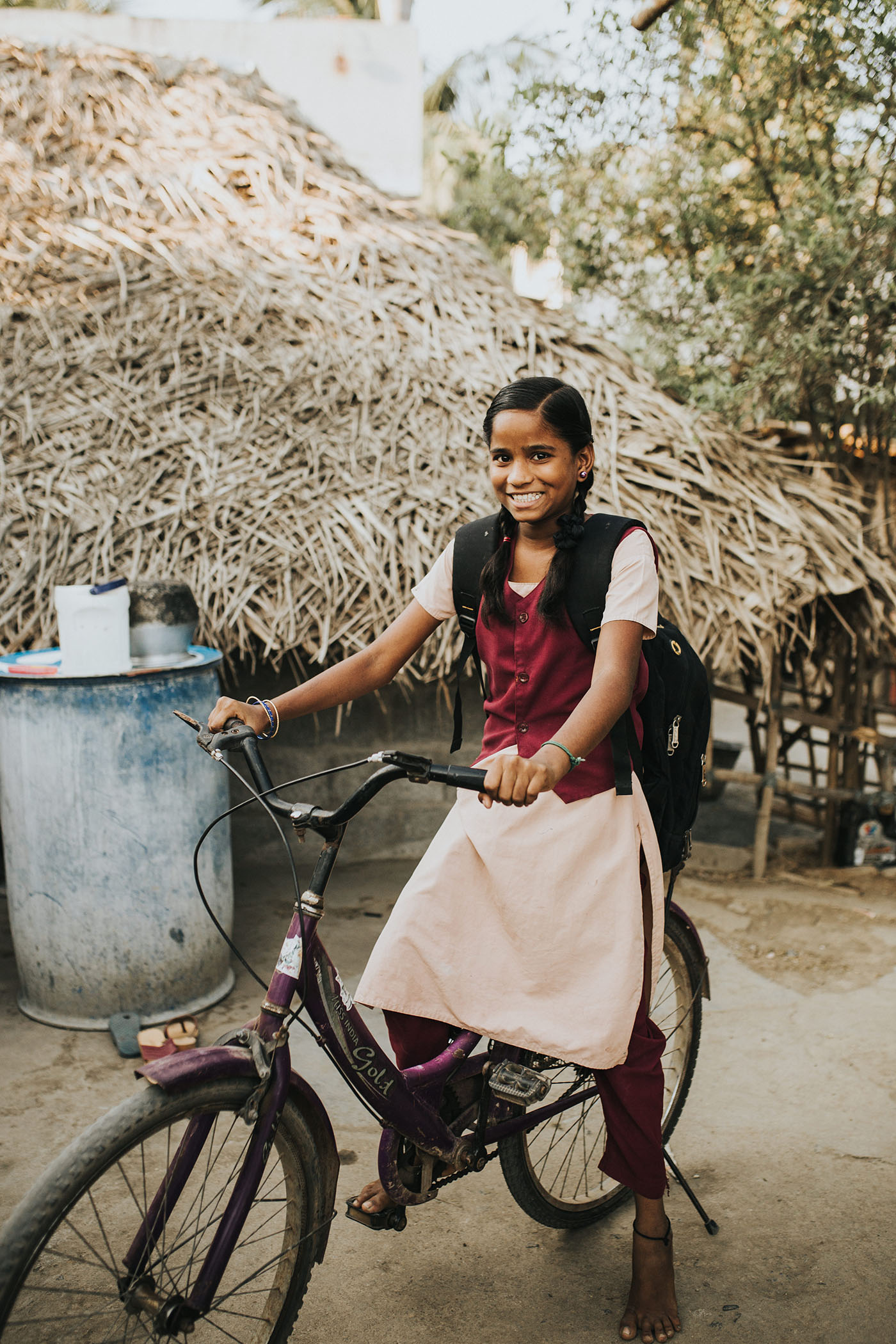 Kavitha deserves to be seen. Her story is not a collection of details and facts to be placed in an Instagram post. Her story is living and active and full of power. Her story is an inspiration, a gift, an arm outstretched. Her story is a picture of light in darkness, of love in difficulty, of hope in despair, of strength in weakness. She holds her parents hands, and in doing so, she gives us hope that all the hands of the world are being held too. That our hands, our fearful, frail, and failing hands, are being held too.

And that’s my hope. My hope is that she’d be seen. My hope is that this photo would not be another photo we scroll past. Another bit of content as our thumbs do our daily dose of despairing. For Kavitha is incredible. And her story is a gift. Her hands are reaching out as an invitation to walk through life, even in all its difficulty and complexity.

So I think it is important to break through the fourth wall of sorts and tell you that though I have never met Kavitha in person, I see her. And I want to say, her story is important enough to allow it to impact us. It is important enough to stop me in my tracks. It is real enough to change my life. For she is not a photo in a catalog, she is a person, a real, incredible, human who has and is making an impact in this world, and she’s inviting us to join her.

To impact more students like Kavitha, donate a backpack today!